Fifty years ago, French architect Jean Balladur created a city like no other in the south of France. La Grande Motte. With symbolism inspired by nature, distant cultures and the visual arts, the architect realized his vision of an ideal city. According to his philosophy, the city should serve the well-being of residents and tourists. In 2011, La Grande Motte was awarded the "Heritage of the 20th Century" award for its evolved unity of architecture and vegetation. We traced this heritage and captured the aura of this extraordinary place in our photographs. 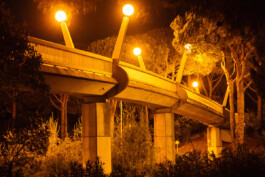